The share price of Harley-Davidson (NYSE:HOG) went into a skid last Wednesday following its second-quarter 2021 earnings report and conference call, plunging 7.19% by market close. Despite many positives in the motorcycle maker’s metrics, investors zeroed in on its higher raw material and supply chain costs, bidding its stock value down on fears of further inflation. The stock continued to fall for several days but more slowly.

With Harley-Davidson’s Hardwire strategy to reforge itself into a more modern, profitable company underway, alarm over a potential stall might appear justified at first glance. But there are also enough signs of a turnaround to potentially support a more bullish viewpoint.

Increasing prices of steel and aluminum commodities, chip shortages, and supply chain problems are all having an effect on Harley-Davidson’s operations, with the ongoing European tariff battle stacking onto these other factors. During the Q2 earnings conference call, CFO Gina Goetter said the supply chain is “very fragile” while noting the company “continued to see inflation across all modes of freight as well as within raw materials,” a situation Harley’s analysts expect to continue and worsen through 2021.

Economists are sharply divided on how long inflation will last, with some believing the price surge is temporary after the brake of COVID-19 lockdowns was released and the economy began reopening. Others say the inflationary trend will continue well beyond 2021 and into the longer term, citing the effects of vast government spending bills.

Steel and aluminum are also trading higher. The chip shortage, despite easing somewhat as some semiconductor companies begin bringing more productive capacity online, could be part of a trend seeing prices remain high as chip demand grows into the long term. Vehicle makers, including Harley-Davidson, are also under pressure from strained global and national supply chains as fallout from lockdowns and COVID-19, along with the explosive growth in e-commerce, put pressure on the sector.

Harley is currently in the midst of a tariff battle as well, with a European tariff on importation of its two-wheelers currently at 31%. The company says this factor could push its operating margins as low as 6% in the coming quarters, though it believes margins as high as 9% are likely if trade negotiations mitigate the tariff’s effects, with a “mid-single digit” margin impact the most likely from all factors combined.

In addition to reducing operating margins, another concrete effect of the tariff and input price inflation is a 2% surcharge on all U.S. sales of Harley-Davidson motorcycles, which the company says is currently intended to be in place between July 1 and Dec. 31, 2021. Nevertheless, Goetter added the company is “maintaining our guidance on the Motorcycle segment revenue growth of 30% to 35%” for Q3 and Q4 2021. Despite all of the converging pressures, the company appears to believe it can keep up its positive momentum — a belief founded on its fresh leadership, new strategy, and the recent gains these factors have created.

Currently headed by a new CEO with a record of success in turning companies around, Harley-Davidson has launched its Hardwire five-year strategic plan to reconfigure itself for success in the modern motorcycle market. The plan involves marketing to younger generations, designing and selling more affordable vehicles, and pursuing the popular electric-vehicle (EV) angle with electric motorcycles. Harley is launching these new initiatives at a time when motorcycle ownership and use appear to be on an upswing, giving it a firmer foundation for its efforts to start growing again.

In terms of debt, both short-term and long-term types are higher than they were in 2019 but have been deleveraged significantly from 2020 highs:

While Harley-Davidson’s current debt load is potentially troubling, its halving of short-term debt from 2020’s peak, plus reduction of net long-term debt to very close to 2019’s figure, reducing it by almost $2 billion, are positive developments and could see further deleveraging if the trend continues.

Beyond immediate metrics, Harley seems to be executing strongly on several important facets of its turnaround strategy. Its LiveWire electric motorcycle is one such highlight. The new motorcycle line has its own “independent” brand, giving it potential breathing room in marketing, free of the shadow of Harley-Davidson styling, culture, and nameplates. Pricing is also a positive, with the LiveWire One carrying a manufacturer’s suggested retail price (MSRP) of approximately $22,000. While not at the cheapest end of electric bikes, this is reasonable enough to make it competitive with rival models.

Similarly, the company’s Pan America adventure motorcycle is priced just under $20,000, putting it in the middle of the pack for pricing of 2021 adventure bike releases and expanding Harley’s foray into affordability. The potential to appeal to younger generations, who look for thriftier options providing fun rather than massive “hogs” and the culture attached to them, may also help drive sales growth in upcoming quarters.

In another attempt to cash in on the budget end of the business, Harley-Davidson opened its “H-D1 Marketplace” on July 21, offering certified pre-owned Harleys at dealerships, with digital shopping and customization available to potential buyers to streamline the buying process. The company also created a new feature to let current Harley-Davidson owners sell their motorcycles back into the H-D1 Marketplace network. Though brand-new and therefore unproven, the program at least shows the motorcycle maker is aggressively looking for new selling approaches.

The new initiatives may be well-timed to cash in on current trends, too, with the Motorcycle Industry Council and other organizations showing a strong double-digit upsurge in first-time motorcycle purchases, along with indicators (such as increased replacement-tire sales) the motorcycles are actually being used rather than sitting idle. 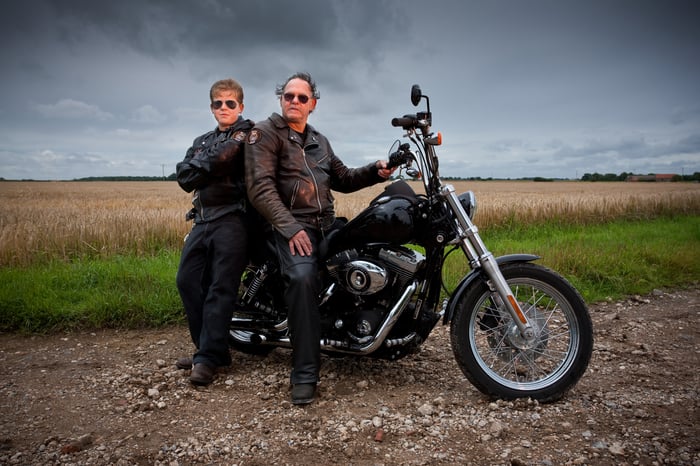 Though not new, its financial services segment is booming, with its full-year fiscal 2021 operating income expected to soar 75% to 85% year over year. This is a significant upgrade to the 50% to 60% gains it guided for earlier in 2021. With financial services integrated into the H-D1 Marketplace according to company press releases, the pre-owned Hog program, if successful, could be another driver for this service.

Alongside European tariffs, the shortages of 2021, their effects already felt across the automotive sector, are beginning to affect Harley-Davidson. Material impact on the company will be a “mid-single digit” drop in operating margins. With Q2’s operating margin at 14%, a hypothetical 5% decrease, exactly in the middle of the range, would potentially lower Q3 and Q4 operating margins to approximately 9%. How significant is this, however, in the greater scheme of things, using the context of Harley’s operational history?

Clarity may come from a look at previous operating margins. During Q3 2020, the operating margin was 4.5%, yet Harley-Davidson still delivered the biggest Q3 quarterly net income during that quarter since 2015. Pre-pandemic, the Q3 2019 operating margin stood at 4.4%. Turning to annual results, the metric was negative 5.7% in 2020 overall and positive 6.3% for full-year 2019.

It appears even with raw material inflation and other factors boosting expenses, Harley-Davidson will be generating profits more efficiently not only compared to last year with its COVID-19 lockdown burden but better than 2019, too. Assuming its estimates of mid-single digit margin impacts are correct, it will still be performing better in this regard than it has for years, an indicator the Hardwire strategy is already sparking a long-term turnaround. Tariffs are already in place and, while reducing European market profits, haven’t reversed Harley-Davidson’s strong revenue and earnings gains.

Unless inflation, shortages, and tariffs persist into the longer term, and many companies already expect inflation and shortages to ease in 2022, Harley-Davidson’s new strategy appears to be succeeding, giving it a bullish future for Fools investing in consumer durables stocks.

This article represents the opinion of the writer, who may disagree with the “official” recommendation position of a Motley Fool premium advisory service. We’re motley! Questioning an investing thesis — even one of our own — helps us all think critically about investing and make decisions that help us become smarter, happier, and richer.